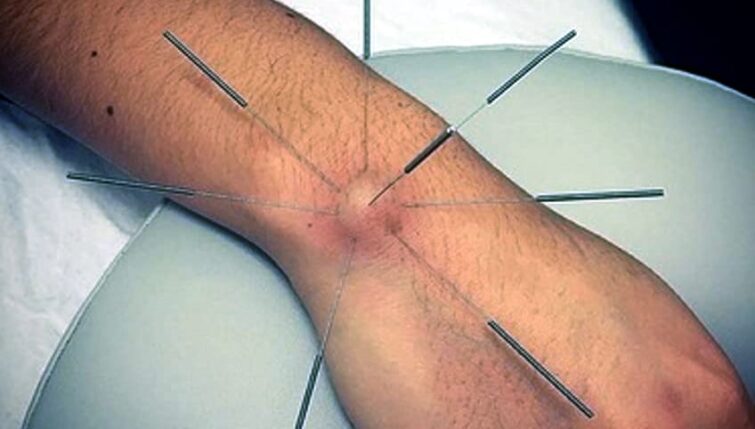 The cause for ganglion cysts from a western medical point of view is still unknown. Theorists have hypothesized that an injury or overuse lead to tissue breakdown in the local area and this debris keeps building up causing a larger and larger lump. This excess tissue then bulges out through the joint capsule. They more commonly occur in the hands and feet.

The Mayo Clinic says that there is more chance of a ganglion if there has been an injury to the area and more women get ganglions than men. In the authors personal experience, yoga teachers have an increased tendency for developing ganglions on their wrists as certain postures put increased pressure on the wrist joints.

This post will look at how traditional Chinese medicine views ganglions and the type of acupuncture treatment that is is used on ganglions. The use of Chinese herbs applied externally onto ganglions will be discussed in a future post.

What is inside a ganglion cyst? How is this looked at in terms of traditional Chinese medicine?

When the cysts are drained there is a colourless, odourless, thick, clear and sticky substance. It consists of high-viscosity fluid comprised mainly of hyaluronic acid; with glucosamine, globulins and albumin. These are called phlegm nodules when classified according to traditional Chinese medicine diagnosis. Traditional theories state that phlegm can be in the lungs, muscles, bones and even in the brain. Phlegm can lodge in the joints causing ganglions. In fact traditional Chinese classic literature texts say: “”

A registered Chinese herbalist in Melbourne, Steven Clavey, has authored a landmark text entitled Fluid Physiology and Pathology in Traditional Chinese Medicine which has whole sections discussing phlegm in relation to disease. Phlegm can also cause rheumatism because the phlegm substance can lodge in the joints. The acupuncture point fenglong is one example of a point that can treat phlegm and could be an option for an acupuncturist treating ganglions.

How is the Spleen involved in the treatment of ganglions?

Traditional Chinese medicine says that the spleen controls the four limbs and symptoms like cold hands and feet for example are due to a weakness in Spleen energy. Practitioners and authors Woitzik and Kissel, used electro-acupuncture on the acupuncture zusanli in the treatment on an ankle ganglion. This acupuncture point has the traditional use of tonifying the spleen. Even though this acupuncture point is below the knee and is nowhere near the ankle or wrist, it may still be selected to treat ganglions.

What about the acupuncture meridian lines, do they flow through the ganglion area?

Depending on the location and size of the ganglion, there may be more than one meridian that is being affected and blocked. For example, on the wrist may involve the small intestine meridian or a ganglion on the foot may need acupuncture on the Stomach meridian.

What about moxibustion? Can that help treat a ganglion?

Firstly let me say that the word acupuncture actually in its traditional language is composed of two characters meaning application of needles and burning of mugwort. So anyone only doing needling to treat a ganglion is doing half the job! There are a number of moxibustion techniques that could be used here ranging from what we call rice grain direct moxibustion or applying larger cones of mugwort directly on the ganglion itself.

Couldn’t you just squeeze the stuff out of the ganglion?

From a western medical perspective this is akin to having the cyst drained. This process is called aspiration. Traditional Chinese medicine practitioners could use a thicker gauge needle and after piercing the skin, then manually squeeze out the fluid. This procedure is not commonly used by acupuncturists as other less invasive methods actually work better and get rid of the cause of the mechanism that leads to ganglions.

If all else fails, the age old Western traditional treatment is to thump the ganglion with a bible. An acupuncturist may choose to use a copy of the Nei Jing.