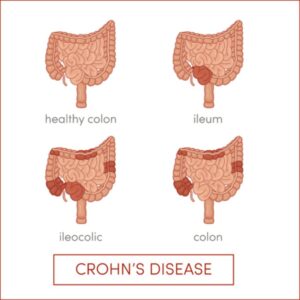 Acupuncture and Chinese herbs can be used for Crohn’s disease

Crohn’s disease is regarded as an autoimmune disease of no known cause. Some researchers suspect that some micro-organism may involved but this has been undetected so far.

Ulcerative colitis may run in the families of those people with Crohn’s disease and  it it is not understood why the incidence of Crohn’s disease  is highest in the 20’s age group.

What causes Crohn’s disease according to traditional Chinese medicine?

Chinese medicine says that Crohn’s disease can be due to inadvertent exposure to extremes of environmental factors such as excess cold and damp; over work leading to a deficient energy state; improper diet involving excess alcohol or too much greasy and oily food.  A major imbalance in the emotional state can also be a causative factor.

Authors Bob Flaws and Phillipe Sionneau in their book, The Treatment of Modern Medical Diseases with Chinese Medicine, state that the treatment for Crohn’s disease and ulcerative colitis with Chinese medicine are basically the same. Damp and heat are often associated with Crohn’s disease and this traditional medicine concept is difficult to translate into a modern medical term. I explain it to my patients by comparing damp and heat to a compost heap just sitting there and brewing accumulating a subtle smouldering heat. The internal body somehow has developed an imbalance allowing this so called damp and heat to accumulate. The imbalance may have come about from irregular diet or exposure to a damp and heat environment. The damp and heat intensifies and then attacks the local area such as the intestines in Crohn’s disease. One traditional treatment strategy is to resolve damp and heat.

Damp and Cold can also be a factor in Crohn’s Disease.

What about Chinese herbs for Crohn’s Disease?

Pain and fullness in the lower right quadrant of abdomen

One of the key note symptoms of Crohn’s disease can be pain and fullness in the lower right quadrant of the abdomen and this is where abdominal palpation and diagnosis according to traditional acupuncture exemplifies itself. Alan Jansson who works in Queensland, Australia says “We need to not only feel if there is pain or hardness but we also palpate for cool and warm areas on the abdomen as well as areas that can feel empty. A hollow empty sensation under the fingers can be indicative of deficiency which is often associated with Crohn’s disease. Other times, under the ribs can feel hard and may indicate impeded blood circulation, known as blood stasis in traditional medicine. How the abdomen feels can determine the approach to applying the appropriate treatment for that individual patient.”

There is no one single acupuncture point or herb that may treat Crohn’s disease. A combination of different points and different herbs will be required that has been prescribed to address the individual’s constitution and accompanying symptoms.