The organization is now best known as Acupuncture NZ

Full contact details for Acupuncture NZ can be found at the end of this article.

The first known Acupuncture practitioner in New Zealand was Wong  Lee.  His father, Wong Kee Lee was a Chinese medicine doctor from Fuzhou. Wong Kee, his son, arrived in New Zealand  on the Steam ship “Rotomahana” on 1st March 1893, paying a poll Tax of £10, later changed his name to Wong Lee.  He moved to Hawkes Bay and used to travel with a horse and cart through Hawkes Bay and would treat whoever wanted and needed treatment.

He Died 18th July 1910, Aged 54 Years and is buried at the Hastings Cemetery. Some of his family descendants still reside in Hawkes Bay.

William Wong Doo was a well known Acupuncurist who started his practise in Auckland in the 1930s. Early on in his career, he received complaints from some people about him doing “Acupuncture” and the police were forced to stop him. He continued however to keep practising, doing food and diet therapy, massage and what he called “Kung Fu Therapy”. Many years later, he was able to do “Acupuncture” and the Mayor of Auckland, Sir Dove Meyer-Robinson became one of William’s patients and subsequently a strong voice in promoting the benefits of Acupuncture to other New Zealanders. His children, Selwyn and Anne have continued the family tradition and practise acupuncture in Newmarket, Auckland.

Acupuncture Training in the 1960s

Acupuncture in New Zealand in the 1970s

The number is not exactly known, but is likely that fewer than 20 acupuncturists were practising in New Zealand in the early 1970s.

It was in this 1970s era that acupuncture started to arouse interest and gain popularity in New Zealand but some people didn’t like the idea of people practising acupuncture. Certain individuals tried to get it banned in New Zealand unless it was performed by Doctors or physiotherapists. In fact, Acupuncture in New Zealand almost became illegal in 1977.

In 1977, under recommendation by the NZ Health Department, a proposed law was to be that ” Acupuncture should be made part of the overall service provided by orthodox western medicine and not be a stand alone form of treatment“. In addition, it would actually be illegal for someone to practise acupuncture resulting in prison sentences if convicted.

At that time in New Zealand, there were very few practising acupuncturists and ten of them got together and formed the New Zealand Register of Acupuncturists Inc to lobby government about this proposed law change. William Wong-Doo was voted in to be the inaugural President. Each of these ten people put up $100 for legal expenses to fight the Medicine Act. The Magnificent Ten were William Wong-Doo, Selwyn Wong-Doo, Ann Wong-Doo, Ken McIver, Jim Payne, Christine Shackelford (Allman), Kam B Chan, Geoff Wai Poi, Bill Beetz and Ivan Pivac.

As fate turned out, a submission was made and after it went to select committee the new proposed law was squashed. Acupuncture in New Zealand was here to stay.

Some of  the the very early original members of the New Zealand Register of Acupuncturists, Martin Greenleaf, Trevor Pritchard, Anne and Selwyn Wong-Doo and Ivan Pivac are still in full time practise today.

All of these presidents are in private practise in New Zealand except for William Wong-Doo, the inaugral president. There is now a special prize presented each year at the annual conference called the William Wong Doo award that goes to one member of Acupuncture NZ for contributing excellence to the profession.

Over the decades, Acupuncture NZ has been involved in many aspects of promoting acupuncture as well as being in the forefront of political intervention. As far back as 1985, a pioneer Back Injuries Survey conducted by Market Research (NZ) in conjunction with ACC, found that acupuncture gained the highest patient response of all modalities. The survey results were based upon questionnaires filled out by Acupuncture NZ members and the summary measured the effectiveness of acupuncture treatment as perceived by patients.

Acupuncture NZ today promotes acupuncture in many ways including through distribution of its informative brochure range. The Acupuncture NZ website attracts many phone and email inquiries to the head office and the staff have  never ending conversations with the public answering their inquiries about acupuncture. Each year in November is Acupuncture Awareness Week and Acupunctre NZ and its members are proactive in giving demonstrations, running free clinics and giving informative talks through out the country.

By 1987, acupuncture education standards around the world were  improving and Acupuncture NZ now required that new members have the equivalent of three years full time training in acupuncture. In addition, by 1988, an assessment and examination process had been put into place. Most Acupuncture Bachelor programs through out the world now are run over a four year time frame.

Members of Acupuncture NZ are expected to abide by the organisation’s Clinical Procedures and Safe Clinical Practice guidelines.

Acupuncture NZ – Member of the World Federation of Acupuncture Societies

By 1990, with more and more acupuncturists as immigrants arriving in New Zealand, an entrance examination and assessment process was put in place. Around the world nowadays, acupuncture colleges and universities offer a bachelors program as well as Masters and even PhD. In New Zealand as at 2018, the colleges here still only offer Bachelors and Masters degrees and it is expected that it is only a matter of time before a PhD will be offered.

In addition, practitioners from overseas must have their qualifications verified by NZQA and are required to undertake and pass written and practical assessments.

All Acupuncture NZ members are required to abide by the organisation’s Rules and Acupuncture NZ Code of Professional Ethics, hold a current first aid certificate, and complete 20 hours of professional development each year in order to maintain their Annual Practising Certificate.

The year 1990 was a landmark year for Acupuncture NZ, as its members were given the official title “Acupuncturist” and became acupuncture treatment providers under the ACC act.

It is estimated that today, most practising  members of Acupuncture NZ would see at least 50% of their patients through ACC. The majority of members in Acupuncture NZ see predominately musculo-skeltal disorders as a result of injury. There are many members though who have specialist interests such as in pregnancy care, fertility and emotional mental support and see exclusively patients with these issues in their practise.

Sadly, Adejola Olatunji, the founder of the first NZQA accredited school of acupuncture, passed away in 2017. He is regarded as being the father of Acupuncture education in New Zealand having graduated hundreds of students over the years.

Acupuncture NZ – a Commitment to Training and Education

Acupuncture NZ – an International Conference in Wellington each year

In addition, there are also many seminars and acupuncture workshops held through out  the year in New Zealand so that members  can up skill themselves and stay up to date with new techniques as well providing an opportunity to catch up with old colleagues. Members of Acupuncture NZ are required to partake in at least twenty hours of continuing education each year. Most continuing education workshops and seminars are held in Christchurch, Wellington or Auckland.

Acupuncture NZ is privileged to have member acupuncturists Debra Betts, Mike Amour and Kate Roberts to have obtained PhDs in the field of acupuncture. They continue to do research and present papers at conferences.  Debra Betts is also the author of a well known text book, The Essential Guide to Acupuncture in Pregnancy and Childbirth.

The work of Acupuncture NZ continues

How many members does Acupuncture NZ have and where are they? 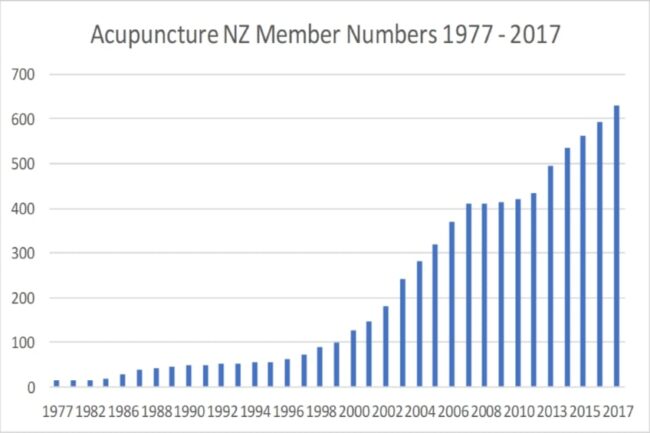 There are over 700 members of Acupuncture NZ practising from Invercargill to Northland. Members consist of New Zealanders who have graduated from New Zealand colleges as well as overseas teaching institutions. There are also many overseas members who have obtained degrees in China, Korea and Japan and then have migrated to New Zealand.

Want to join Acupuncture NZ or find one of their members?