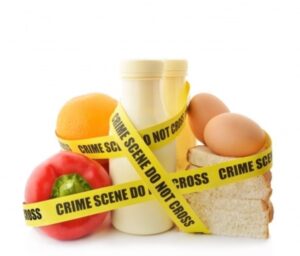 Natural foods are bad for some people

The American Academy of Medical Acupuncture endorses acupuncture for food allergies because it can help restore normal immune function. The main foods that people are allergic to are cow’s milk, soy, eggs, wheat, fish, shell fish and tree nuts like walnuts. Peanuts probably cause the most severe allergic reactions. In some cases, even opening a jar of peanut butter in a room can cause hives and respiratory distress in susceptible children. The body reacts to the proteins of these foods because it believes they are harmful. Symptoms can include hives, nausea, swollen eyelids and  wheezing.

What can western medicine offer?

Western medicine has no cure for the problem and recommend avoiding the allergic food once it has been identified. Some drugs may minimize the protein allergy reaction.

What can Chinese medicine offer?

From a Chinese medicine perspective the fundamental treatment of food allergies is no different to treating other allergic reactions such as hay fever.

If both parents have had food allergies, and then their children have a high incidence of having allergies as well. Chinese medicine addresses this issue by treating a special system of meridians called the eight extra meridians which are believed to contain the constitutional strength of the person.

When symptoms such as hives are predominant, the acupuncture physician aims to treat the wei qi, which is translated as the protective energy. This is like a force field of energy like thick air that flows over the outside of the body, especially on the torso. The liver plays a role in the rejuvenation and metabolism of the wei qi which it does at night during sleep. There are specific acupuncture point combinations that can improve the protective energy.

Are food allergies a yin or yang problem?

Some specialist acupuncture physicians such as Mr Alan Jansson on Australia’s Gold Coast, breaks down food allergies into two main types. He says “The classic text books always remind physicians that they must first look to see if the disease is yin or yang. In this instance, there are Yin reactive food allergies and there are Yang reactive food allergies. Yang reactive food in-sensitivities are quick to come after the allergic food has been ingested and give red fire yang like symptoms, like hives. Yin reactive food in-sensitivities are slow to appear and for example can make the patient tired, dull, and bloated and cause diarrhea“. Depending on the patient’s other signs and symptoms, Mr Alan Jansson may use lung root or liver root treatments to address the underlying cause.

Scott Pearson of the Newtown Acupuncture Centre in Wellington  said “Research from 2012 has shown that a specialized Chinese herb formula has been found to completely block anaphylaxis in the animal studies that were used”. He also said that the difference between the western medical approaches is that modern pharmaceuticals try to suppress symptoms. Chinese herbs aim to improve the immune system and make the patient healthy with the goal  that they don’t have to avoid the allergic food.