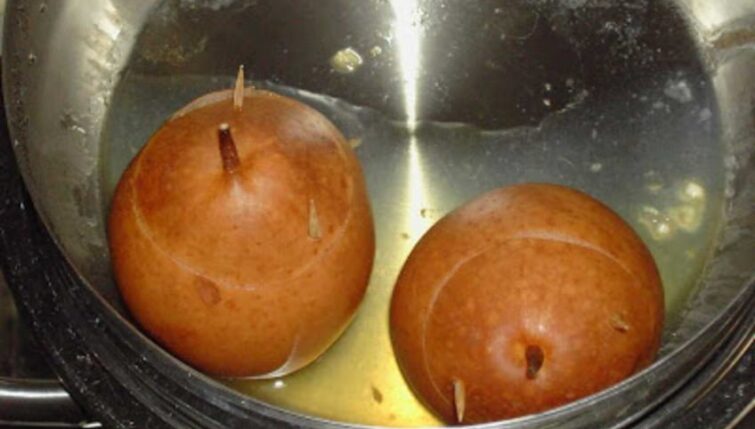 In our continuing series of posts of using Chinese herbs in cooking, we ask Albert Zhang, a New Zealand Register of Acupuncturists member practicing  in Auckland, to provide us a nice tasting recipe for a Chinese herbal desert. The challenge of course for Albert  is not that it only tastes good but needs to be good for you as well. He has come up with a dish known in Chinese as Stew of Pear with Fritillaria Powder. The herb used  is called chuan bei mu and is the bulb of the plant. Fritillaria is available at most Asian grocery stores.

Ingredients of Stew of Pear with Fritillaria Powder

A small lump of rock sugar

Get the pear and cut the top off and then core the pear removing the stalk and making sure to leave the bulk of the pear flesh intact. The Fritillaria bulb usually comes in small round shaped balls which can then be put into a mortar and then crushed with the pestle to fine powder. Add the powder and rock sugar to the hollowed out pear and put the top of the pear back on top of the pear and keep in place with a toothpick. Put the pear into a large cup with water almost filling the cup so the pear stands upright. Then put a saucer on top of the cup and put that cup into a large pot with more water so the cup is surrounded by water. Put the lid on the pot and and bring to boil and then the  turn heat down and simmer for  45 minutes. Special double steaming pots can be obtained at most Asian grocery stores as well if so desired but the cup and saucer works fine.

Benefits of Stew with Pear with Fritillaria Powder

This combination has the tradition and reputation to alleviate cough caused by dryness such as seen in Autumn. It also is said to benefit the dry cough of elderly people. But Albert says ” You don’t have to have a dry cough to have this. I have it just because it tastes good but I suggest avoiding this if you have a cough with lots of thick sticky phlegm.“