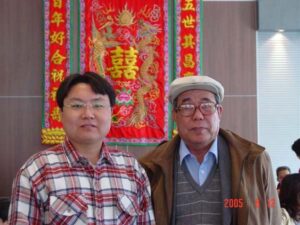 The Acupuncture Clinic consulted with Albert Zhang of Auckland as to what is a nice tasting Chinese herb soup that could be eaten at lunch and something that is good for you too.

Chinese herbs when taken as medicine do have the reputation of tasting bitter and people rarely like the taste of them but put up with the taste  because of their benefits.

There are many Chinese herbs however, that are consumed as food providing nourishment whilst actually tasting good.

One such example is Stewed Pork with Lily Bulb and White Fungus. “Don’t be put off with the idea of eating fungus, it is no different to eating mushrooms” says Albert Zhang from his New Hope Chinese Medicine Clinic in Browns Bay, Auckland. All these herbs are easily obtained from an Asian grocery store and are inexpensive.

Soak the lily bulb separately for half an hour.

Soak the white fungus until it is swollen and then tear into small pieces and wash. 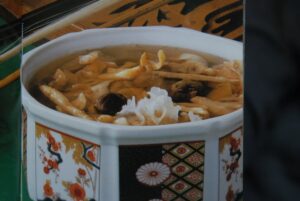 Then cook the pork and white fungus for 5 minutes in boiling water, then take out and wash.

The last step is to put the pork, white fungus, sha shen, lily bulb and dates into 4-5 cups of boiling water and then stew slowly for 3 hours.

Add salt to taste if desired.

You can eat the herbs as well as drink the broth.

What is good for?

We ask Albert about a dish that sounds so weird and looks just as weird as to what it  is actually good for. “These medicinal herbs have the reputation to nourish the yin. Yin and yang is one of the most difficult Chinese medicine concepts to explain to westerners. When you have yin deficiency there is dryness in the body stemming from an internal heat imbalance. Different organs of the body such as the lungs, stomach and kidneys can all become yin deficient. The lily bulb, sha shen and white fungus are particularly good for lung yin deficiency. It is not just smokers that become lung yin deficient but people working in dry dusty environments or even those continually exposed to air conditioning can all have their yin consumed. Sometimes a chronic lingering cough leads to slow depletion of yin fluids in the lungs. This soup can help a chronic dry cough”.

Albert also goes on to tell us that herbs and foods like this are taken to strengthen and moisten the lungs and you don’t have to have a cough to enjoy this soup.

Our next post on Chinese herbs, we will ask Albert what we can have for dinner that has Chinese herbs in it, is easy to make and most importantly, tastes good too.