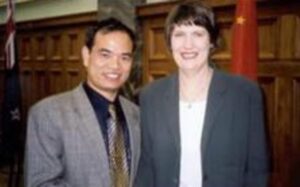 Thomas Lin migrated from China to New Zealand in 1994 and first started working as an acupuncturist in Palmerston North before moving to Christchurch in 1996.

When he first went into practise he had a lot to learn about the differences in dealing with New Zealanders and Chinese. He will talk to us about how his patients had helped him and continue to encourage him to become a fully-fledged kiwi.

Thomas now shares his work load between his acupuncture practice and as a consultant to ACC advising on Asian cultural matters.

Since 2008 he also been the Vice President of the New Zealand Register of Acupuncturists Inc.