Firstly we need to look at what the Chinese characters qi gong 气功 actually mean. Qi sometimes written as Chi,  is somewhat difficult to translate and can have a number of different meanings depending what context it is used in. It is often translated as energy when used in the context of acupuncture and Chinese medicine, though Life Force may be a more meaningful and easier to understand term. Often, authors have classified the word Qi in the same basket as the Indian Ayurvedic word Prana, which again is often referred to as Life Force.

The concept of Life Force is the basic fundamental factor that differentiates modern western medical thinking and traditional Chinese medical thought. Modern medicine does not have any concept of Life Force. This energy or Life Force is all around us; hence Qi is sometimes translated as air or vapor. The Life Force also is within us, circulating in the meridians of the body and emanating at the acupuncture points. This Qi or Life Force can’t be seen, caught, measured or bottled and therefore western scientists conclude Qi doesn’t exist, and therefore traditional acupuncture is nonsense or at best, only works because of placebo.

The Qi is cultivated through exercises that focus on specific types of breathing whilst simultaneously calming the mind. These exercises can involve stationary postures or gentle moving and stretching movements. In fact, many people refer to qi gong as moving or standing meditation. Other qi gong exercises can involve tapping the body at acupuncture points or energy centers sometimes called chakras in Indian yoga terminology. The main qi gong energy centre of the body is located just below the naval and called the dan tian.

There are many different styles and methods of qi gong including qi gong specifically for your own general health, qi gong to heal others and what is called hard style qi gong for kung fu martial artists.

However, all of the different qi gong styles have one common denominator amongst them all, and that is they require concentration and focus on the dan tian area below the naval at some stage of the exercise process.

In the hospitals in China, you actually have qi gong doctors working in their own wards. When you undertake Traditional Chinese Medicine training in China you specialize in one of the fields of acupuncture, Chinese herbal medicine, tui na (Chinese therapeutic massage) or qi gong. Not many students opt to do the specialist training in qi gong because it is so time intensive and involved. It takes a lot longer to graduate as a qi gong doctor than as an herbalist or acupuncturist. Many hours of each day are spent actually doing the qi gong exercises to cultivate their Qi so their energy accumulates and becomes very strong so as to be able to heal other people.

Research has been done in China where scientists have measured the out come and the results of the qi gong practitioner’s healing intention. For instance, the practitioner was able to change the ion concentration in water, make plants grow faster and change the taste of food and wine.

Some acupuncture practitioners have been doing qi gong for many years and use it along with their treatments. One method of applying the Qi is simply for them to place their hands on the patient and it doesn’t necessarily have to be on the problem area. When someone has been practicing qi gong exercises for many years, when they go into a qi gong or meditative state, their brain waves actually change. By the practitioner placing their hands on the patient, this altered brain wave state of the practitioner is transferred to the patient. Then the patient’s health benefits from this altered mind state. Research has confirmed that meditation ala the qi gong brain wave state can treat and improve many disorders including cancer. In Wellington, Xiao Meng who works from the Newtown Acupuncture Centre opposite Wellington Hospital,  is one such a gifted individual who after many years of cultivating his Qi is able to combine acupuncture with qi gong healing to further benefit the treatment outcome.

In order to benefit from the healing effects of Qi, it is suggested that a number of different treatments are combined. Acupuncture can specifically regulate the Qi circulation in the meridians; herbs have properties of specific Qi, such as warming, cooling and harmonising and are prescribed as depending what is needed by the body. If you take up learning and doing qi gong and meditation on a regular basis you will be able to improve the quality of your Qi and circulate the Qi to improve your health. This will also make any acupuncture or herbal therapy work even better for you. For very ill people or people aiming for optimum health balance, it would be of great benefit to receive qi gong healing.

I personally have traveled  to Hong Kong and China and observed Mr Shao Xing Xuan who has developed his own qi gong form, known as Han Yang Ru Yi Gong. To see a demonstration of Mr Shao’s qi gong healing sessions performed on me, please go to the YouTube link.

In the first few minutes of the movie, you will see other patients receiving the Qi when they were standing up. Please note that Mr Shao doesn’t actually touch the patient yet his qi gong healing will make the patient move around as if in a drunken walk. Just imagine when someone hits your funny bone and your elbow jerks involuntarily. The YouTube movie demonstrates how the healing effect of Qi can cause involuntary movements of the patient, only much more dramatic than the funny bone test.

Mr Shao when doing qi gong on me in the second part of the movie exemplifies the dramatic effect of the Qi on the human body. All the movements of myself twisting and shuddering on the floor were involuntary and during some of the spinal twists all my vertebra even cracked into place.

Results that can be achieved with qi gong are beyond what western science could comprehend.

One patient of Mr Shao Xing Xuan that I interviewed  had an incurable, inoperable liver tumour which had reduced by 60% with 3 months of qi gong treatment as confirmed by western medical tests. Other patients bound in a wheelchair would have their legs moving around in the air kicking out while seated in their chair. Patients on sleep apnoea machines would sell their machines after a few months. These people had regular healing qi gong sessions from Mr Shao and when possible also learnt and practised his style of qi gong exercises as well. 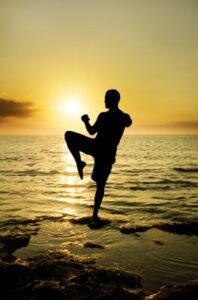 Many patients coming to The Acupuncture Clinic continually ask “What else should I be doing to improve my health”. The simple answer is to take control of your own health and destiny and don’t rely on the marketing tactics implemented by pharmaceutical companies.

Learn and practise a therapy that improves your Life Force, empowers you and has the potential to heal you such as Tai Qi, Yoga, Kung Fu, Meditation and Qi Gong.

Improving your own health is your responsibility. It’s your choice.