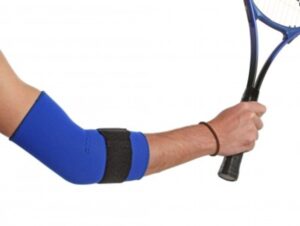 This condition  is commonly referred to as lateral epicondylitis in the medical fraternity and acupuncture for tennis elbow has been found by research to be an effective treatment. Fundamentally, this condition has pain at the outside of the elbow usually after some kind of trauma. It is common with tennis players either because of the constant jarring of the elbow when hitting the ball or  when they miss the ball and the arm is overstretched.

Who can get tennis elbow?

Tennis players and other bat and ball sports people as well as carpenters and musicians also can get tennis elbow. Golfers can also get a similar problem affecting the inside of the elbow commonly referred to as golfer’s elbow.

Why is tennis elbow more common after the age of 40?

The problem of tennis elbow commonly occurs in people aged between 35 and 50. In traditional Chinese medical literature, there is a saying “At 40 years of age, the qi, blood, yin and yang is at half level”. This means that because of the aging process our reserves of energy have decreased and therefore it’s easier to get an injury. Hence acupuncture and Chinese herbal treatment in sports injuries also involves treatment to improve the constitutional health of the patient and help restore weakness as a result of the natural aging process. Statistically, there are less people aged 50 and over with acute injuries such as tennis elbow because they have cut back on playing competitive sports. They usually have learnt by then how easy it is to get an injury and how much longer they take to get better compared to when they were younger. There is another saying in traditional Chinese medicine “An injury when over 40 years of age, takes 100 days to heal”. So yes, as in western medical treatment, rest is important when helping the recovery of injuries such as tennis elbow but acupuncture and Chinese herbal medicine can rapidly accelerate the healing process.

Research and acupuncture for tennis elbow

Research from a study presented at the annual meeting of the American Academy of Physical Medicine and Rehabilitation in San Francisco reported that acupuncture not only relieves the symptoms of tennis elbow, but actually resolves the condition completely. This study also included some patients who had had tennis elbow pain for more than two years! Many of these chronic patients had undergone “extensive hand therapy interventions” including an elbow brace or splint; corticosteroid injections for pain relief; and elbow surgery, all without achieving the desired effect, before turning to acupuncture.

In New Zealand, the Accident Compensation Corporation (ACC) covers acupuncture for tennis elbow for around 20 visits.